Can Wearing A Hearing Aid Help With Tinnitus? 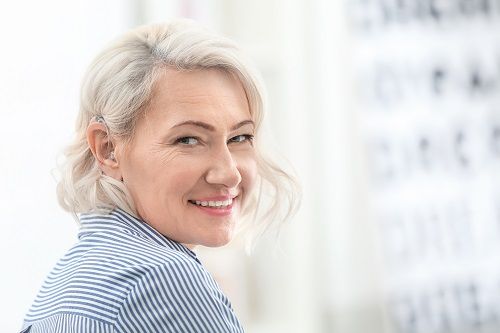 Tinnitus is a common condition characterized by the perception of a persistent ringing, buzzing or pulsating noise in the ears. While hearing aids won’t stop tinnitus, wearing them can help manage symptoms and relieve much of the discomfort associated with this condition. Here’s what you should know about tinnitus and how wearing hearing aids can help.

Chronic tinnitus can be the result of an injury to the peripheral auditory system (the outer, middle and inner ear), the auditory nerve or the hearing centre of the brain. In many cases, this damage is caused by long-term exposure to loud noises. Tinnitus can also be a side effect of aging or taking certain medications. Alternatively, a serious ear infection can trigger this condition. Tinnitus can also be present with no cause at all.

In addition to the persistent perception of noise, many people with tinnitus experience:

How can a hearing aid help?

At the moment, there’s no permanent cure for tinnitus. However, wearing hearing aids can be an effective way to manage symptoms. This is because tinnitus is often accompanied by partial hearing loss. In these cases, wearing hearing aids restores your ability to hear a wider range of sounds, which can help you tune out tinnitus symptoms such as a ringing and buzzing sound.

A hearing aid can also amplify your perception of background noises, which helps reduce your awareness of tinnitus symptoms. Plus, you can use these devices to hone in on the sound of the TV or voices during a conversation. This makes it easier for you to focus on the sounds you want to hear.

According to the American Tinnitus Association, a 2007 survey found that approximately 60 percent of participants with tinnitus reported that wearing a hearing aid helped relieve their symptoms. In the years since, hearing aid technology has expanded to include cutting-edge features that can be used to target this condition.

For example, hearing aids equipped with wireless media streaming and paired with a smartphone app can be used to create a sound-enriched environment designed to minimize tinnitus symptoms.

If you want relief from tinnitus, the dedicated team at Soundwave Hearing Care can help. We offer a wide range of custom hearing aids as well as Tinnitus Retraining Therapy (TRT) to help reduce your symptoms. For more information about tinnitus or to schedule a consultation, contact us today.