What is A Decibel? 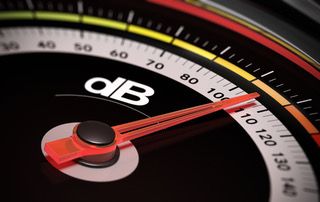 A decibel is a unit of measure that compares two power levels, most often used when talking about sound intensity.

In audiology, we use decibels when testing people’s hearing and identifying which sounds can damage human eardrums. Keep reading to learn more about how decibels are calculated and what kinds of sounds can lead to hearing loss.

Decibels as a measure of sound intensity

Because human ears can hear noises with both very small and very large pressure waves, sound intensity needs to be measured using a logarithmic rather than linear scale. If you tried to represent the full scope of human hearing using a linear scale, you’d need to use a range of sound levels from 0 to 100,000,000,000, which is far too vast to be useful.

On a logarithmic scale, values increase by powers of ten. This means that a sound that’s 100 dB is not 10 times more intense than 10 dB, but rather 1,000,000,000 times more intense. As a result, the decibel scale can range from 0 dB to 150 dB and still accommodate all the sound levels that humans hear. Each decibel involves an increase of approximately 26%, which is roughly the smallest change in sound that the ear can detect.

A decibel is one-tenth of a bel, a rarely used unit named for Alexander Graham Bell, the inventor of the telephone. This is because the decibel scale was developed so that the first telephone companies could represent the amount of signal loss in phone lines. While decibels are most commonly used to measure sound, they also have applications as a measuring unit in the electronics and telecommunications industries.

Over the course of a day, you hear noises that register at all different points on the decibel scale, from wind rustling in the trees to cars honking in the streets. Here are the approximate decibel levels for some everyday sounds:

How high-decibel sounds cause hearing loss

If you work in a noisy environment or often attend live concerts, it’s important to wear some form of hearing protection. You should also avoid listening to music at high volumes, especially while wearing headphones. Keep in mind that the volume on most handheld devices goes up to 80dB and above.

Soundwave Hearing Clinic is proud to provide hearing solutions to residents of Calgary, Grande Prairie and surrounding areas. Whether you need to have your hearing tested or have a hearing impairment and require hearing aids, our audiologists will be glad to help. To book an appointment in Calgary or at another one of our clinics, contact us today.